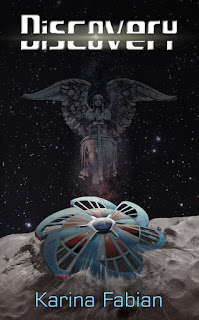 Today, I am thrilled to host Karina Fabian as a guest blogger.

With the Enlightenment era came an anti-religious fervor that not only permeated science and philosophy but also literature. Now, some 200 years later, the pendulum is swinging back, and people are again interested in seeing stories that show an expression of faith in a familiar and religious way. However, in those two centuries, we seem to have lost the knack for weaving the faith and fiction, and that has led to heavy handed or even preachy expositions rather than a beautiful demonstration of faith in a good story that influences the reader.

We know it can be done. Many of our best loved classics have religious underpinnings in the theme and worldbuilding. We can do it again, and I think the key lies in five simple rules.

#1  Tell a good story.   If you are only writing your story because you have a message to send (or an ax to grind), then write an essay.  Good stories have characters you love—or love to hate—plots that are exciting and intriguing, and settings that bring you into the story.  Know the art of storytelling, and let the story deliver your message—not your message dictate your story.

#2  Give the reader complexity.  Readers are more sophisticated, for the most part—they do not want a simplistic Good and Evil scenario.  Nor do they want “plastic Jesus.”  Whether it’s your priest hero or the church your main character attends, let the reader see beyond the surface—the good and the bad, and the stuff that isn’t so clear.

#3  Know the religion you’re writing about.  Don’t let ignorance lead you to misrepresent a faith, whether someone else’s or your own.  Do some research, get someone of that faith to read your book, and also examine your own motives. For example, in the Rescue Sister’s story, “Antivenin,” (Infinite Space, Infinite God II), I had a Pentecostal snake handler.  Personally, I think the idea of handling snakes to prove your faith is nuts, but the idea was fascinating.  I’m lucky enough to have a friend whose mother was a Pentecostal minister, and she read the story for me, noting that a lot of what this minister did is NOT the way the church approves—even down to the kind of snakes I’d put on the spaceship.  I did more research and discovered other errors.  When I fixed them, it made the story stronger because I had added a new dimension to the character, that he was rejected by his church because of his excessive ways.

#4  Don’t use religion as a crutch.  There’s nothing more dissatisfying in a story than an easy answer—yet (ironically) the temptation is to use religion to solve the conflict.  The person “finds God” and suddenly their attitude changes and all their problems start to fade.  Or someone prays and the miracle happens, The End.  Life is messy.  Good fiction, while more clearly portrayed than reality, is not cut-and-dried, either.
#5  When submitting, know the publisher.  No matter how good your story is, you still have to follow their guidelines and conform to their philosophies.  A good example is Rachel’s Contrition by Michelle Buckman.  It’s a powerful story of a woman who loses a child, and her faith—Catholicism—is an integral part of her healing, and thus of the story.  Michelle has been successfully published with CBA publishers, but this book was too Catholic for their tastes.  She had the choice of removing all traces of the religion—changing the theme and character—or going to a smaller, Catholic press.
I have a reputation for being a faith-in-fiction writer.  My faith informs my identity, and it fires my imagination.  I’ve been very proud of the books I’ve written and edited, the latest of which is Discovery. I would classify it as a “Catholic Pride” novel, because not only can you not take out the Catholic elements and keep the story, but the faith itself is a kind of hero in the book. However, most of my books are not so obvious. Nonetheless, my characters often have a religious side that does not want to be hidden, and my worlds have religions. That’s a reflection of life.