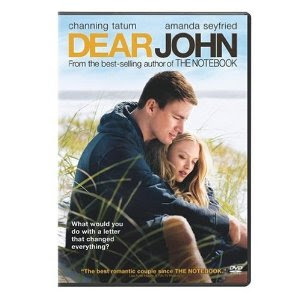 As I hoped, I did get to watchDear John

Saturday night. It is always interesting to see how a book is adapted for the big screen. It is hard to have the same character development in a movie as in a book. The novel by Nicholas Sparks reveals a great deal more about what is going on in the main character's (John) head. Motivations are much clearer. Without that, some of the action in the movie seems a bit disjointed. Why did the characters act the way they did? It doesn't really make perfect sense  Overall, I feel that the movie was good. While not a classic, it was a good way to spend a couple of hours. They mostly stuck to the storyline in the book, with a few minor changes here and there. One definite change was the ending (which I will not reveal for anyone because I don't want to be a spoiler). I will say that I did like the ending better in the movie! Anyone who enjoys a Nicholas Sparks' story or a good romantic movie will enjoy this film.