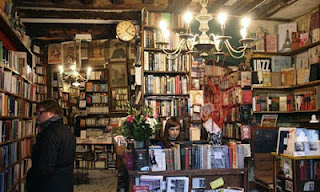 Reading today's paper, I came across this article by Barbara Bernard: Paris Bookstore Shakespeare and Co. is a Bibliophile's Dream

She tells how she came to experience the bookstore and it's owner, who recently passed away:

George Whitman was delightful. He was a few years older than we, and this article reported he was 98 when he died.

He was a true bibliophile who had gained the name of “Don Quixote of the Latin Quarter.” He had little money and lived in a small apartment above the book store with his daughter Sylvia and his cat and dog. He decided more than a half century ago that he wanted to have a haven for book lovers and a place where writers and would-be writers would always be welcome.

My husband told him that I was a journalist, and he immediately introduced me to several people sitting in various spots in the bookstore, reading or chatting and interesting. All were writers, some still unpublished but not discouraged.

The bookstore was also a library, and anyone was welcome to borrow books to read. I know he sold some books because I found a modestly-priced, small collection of Shakespeare that I couldn’t resist. In the many times we visited, though, I would hardly say I found it to be a booming book-selling business.

Whitman had a number of comfortable chairs tucked around the rooms of the store, and sometimes someone would be asleep in one with a book opened flat on his chest. Other times, you might find someone in a discussion with a person sitting in a chair opposite him.

I have never seen so many books. They were stacked from floor to ceiling with a system that only Whitman and his daughter seemed to understand. If you asked for a specific book, they could amazingly find it for you. Every year when we visited, Whitman had added a stray animal, usually cats that would wander the store and were apt to climb up into your lap while you were sitting in a comfy chair perusing a book.

The store was open long hours, and Whitman was always there. He was remembered in the obituary for “his free spirit, his eccentricity and his generosity.” Written on one of the walls of the store were some of Yeats’ words which summarize these qualities: “Be not inhospitable to strangers lest they be angels in disguise.”


I also found this article about the history of the famous store: Down and Out in Paris

Thankfully, the bookstore is continuing, under the direction of Whitman's daughter Sylvia.
Posted by Anne Faye at 10:42:00 AM

Email ThisBlogThis!Share to TwitterShare to FacebookShare to Pinterest
Labels: bookstores