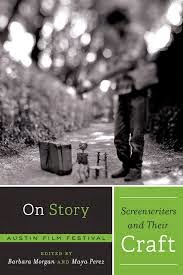 On Story: Screenwriters and their Craft, edited by Barbara Morgan and Maya Perez is a project of the Austin Film Festival.  As Morgan states in her introduction, "This book is about the moment a film is born and how it evolves, told from the perspective of its originator - the story teller." The text is excerpts from conversations well-known screenwriters have had over the years as part of the Austin Film Festival. Topics include Inspiration, Story, Process, Structure, Character and Dialogue, Rewriting, and Collaboration. Excerpts from actual classic screenplays are also included which adds to the instructive quality of this book. There is nothing like being able to read the masters at work! This book is highly useful for anyone interested in screenwriting.

There is also corresponding series on television also called "On Story." There is much more information on http://www.onstory.tv/.