The Public Library: A Photographic Essay by Robert Dawson 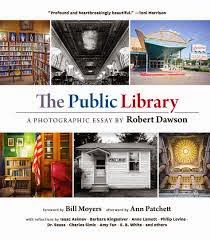 The Public Library: A Photographic Essay

by Robert Dawson" (Princeton Architectural Press, 2014) is more than simply a collection of beautiful photographs of libraries from around America. While that in itself would make an attractive book, this particular volume contains many reflective essays regarding the history of libraries and their current place in American society.

To complete this project, Dawson spent eighteen years taking pictures of hundreds of libraries in 47 states. He writes, "My photographs capture some of the poorest and wealthiest, oldest and newest, most crowded and most isolated, even abandoned libraries." On a personal note, one of the libraries included is Storrs Library in nearby Longmeadow, Massachusetts - my copy of this book came to me via inter-library loan from that very library.

In the Foreward, Bill Moyers writes that "when a library is open, no matter its size or shape, democracy is open, too." It is a place open to all where knowledge is free for the taking. Because they are open to anyone, libraries frequently become de facto shelters for the homeless. This puts librarians in the difficult position of acting like social workers, trying to help these poor and/or mentally ill get the assistance that they need.

Stuart A.P. Murray offers a historical perspective on how public libraries came to be in this country. There are also essays about the economic challenges libraries face. Ironically, as David Morris, relates, "not a single library closed its doors during the Great Depression [yet] nineteen states cut funding for public libraries in 2011. More than half of the reductions were greater than ten percent." Some of the most heartbreaking images in this book are of closed, run-down libraries.

Libraries are so essential to the educational, social, and political life of our country. The Public Library is more than an attempt to record the beauty and importance of these places, but also to remind readers that your local library is worth fighting for and supporting with tax dollars. Perhaps Ann Patchett sums it up best: "Libraries have always been defined more by their spirit than by their space. Even the smallest can provide that deep human comfort that comes from reading and ideas."