Sunflowers in a Hurricane, Chapter Three 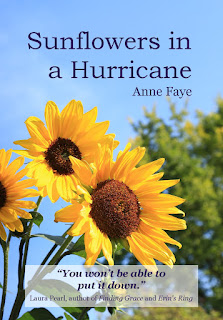 Sunflowers in a Hurricane by Anne Faye

Read Chapter One and Chapter Two.

don’t understand why we have to leave today. You know the party is tonight.” Kim and I had been planning it for a month. She was counting on me. We were celebrating finishing 7th grade. It was going to be our first boy-girl party ever. Not to mention, by some miracle, a few of the popular kids were supposed to be going. Plus, Kim had said that Angie told her that Pete said that Ron, who was the cutest boy in school, might make an appearance. And I was going to miss it. This sucked big time.
“I know and I’m sorry. But we’ve been over this. We need to get to Massachusetts. There are arrangements that need to be made.” My mother did not seem sorry. In fact, I was convinced that she was taking some weird joy in ruining my life.
“Can’t they be made a day later?” I shoved my suitcase and backpack into the back of our beat up two-tone brown station wagon. I doubted the heap would even make it.
“Do you honestly think that I scheduled your grandmother’s death?”
“No, but it’s not like you two were close,” I pointed out. “I met her twice in my whole life, and one of those I don’t even remember.” I felt bad that she was dead, but it wasn’t like she wouldn’t still be dead a day later.
My mother slammed the hatchback shut. It was piled up with garbage bags filled with our belongings and wouldn’t close. She opened the door, pushed the bags in, and slammed it with even more force. I was surprised the car didn’t break.
“It’s so stupid that we have to take all our stuff. We’re going to come back.” Ohio was my home. My whole life was here.
“Yeah, but we’re going to be there for a while, and I can’t afford to pay for an apartment we aren’t living in.”
“We need to come back soon.” The sooner the better.
“This is no picnic for me either.”
My mom got in the driver’s seat and I slumped into shotgun. We pulled out of the driveway, a Carly Simon song playing on the radio. Where was Bon Jovi when you needed them? This was going to be the worst trip ever. As we headed down the road, I kissed my entire summer goodbye.

Email ThisBlogThis!Share to TwitterShare to FacebookShare to Pinterest
Labels: Catholic Fiction, Sunflowers in a Hurricane