A Fascinating Look at How Dictionaries are Made 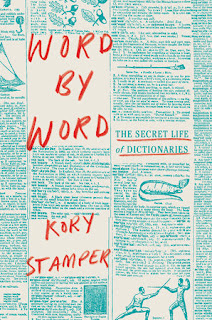 Like most people, I have never given the dictionary much thought. It’s a useful tool that I appreciate having, but I never considered that there are people whose job it is to write all those definitions. In her new book, Word by Word, Kory Stamper, lexicographer at Merriam-Webster (located in my hometown of Springfield, MA), takes you behind the scenes of what actually goes into creating a dictionary.

She states, the dictionary “is a human document, constantly being compiled, proofread, and updated by actual, living awkward people. In that unassuming brick building in Springfield, there are a couple dozen people who spend their workweek doing nothing but making dictionaries – sifting the language, categorizing it, describing it, alphabetizing it.”

Word by Word is awesome for anyone who loves the English language. Stamper’s writing style is incredibly engaging with a healthy dose of humor. This book was both fascinating and laugh-out-loud funny.  There is a healthy amount of swearing in this book. After all, all those expletives count as words as well. But even with that caveat, I am heartily recommending Word by Word. I’ve never read anything like it before and it opened my eyes to a whole new appreciation for both dictionaries and the English language.