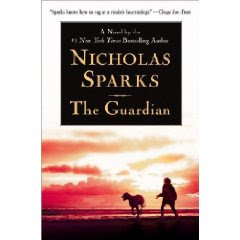 I'm a huge Nicholas Sparks fan. What can I say? I'm a sucker for a good love story. I recently picked up The Guardian

at my local library. It is one he wrote a while back, but that I had never gotten to read. I greatly enjoyed it! It is different from most of his other books. It still has a strong romantic storyline, but it is also very suspenseful.

In his "Author's Note," Sparks writes:

The genesis of a novel is always a tricky process. Often it begins with a vague idea, or in my case, a theme, and for this novel, I chose the theme of love and danger. In other words, I wanted to write a story in which two believable characters fall in love, but I wanted to add elements of surprise and peril that would ultimately put both characters in jeopardy. I can't remember where I was when I made the decision to attempt such a story, but I do remember thinking that I was going to enjoy the process of trying to write a type of novel that I hadn't written before.


Boy, was I ever wrong. . . .From first to final draft, the novel went through eight major revisions until my editor and I were finally satisfied that the novel accomplished what it set out to do: that is, be a love story first and foremost, and secondly - in a way that sneaks up on the reader - a compelling thriller. . . .On my end it made for many sleepless nights.

Even the best writers have to work at it!