A Love Letter to the Letter 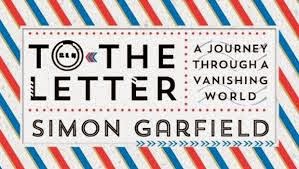 Letters have the power to grant us a larger life. They reveal motivation and deepen understanding. They are evidential. They change lives, and they rewrite history. . .

This is a book about a world without letters, or at least this possibility. It is a book about what we have lost by replacing letters with email – the post, the envelope, a pen, a slower cerebral whirring, the use of the whole of our hands and not just the tips of our fingers. It is a celebration of what has gone before, and the value we place on literacy, good thinking, and thinking ahead.

Thus writes Simon Garfield in his latest work, To the Letter: A Celebration of the Lost Art of Letter Writing

. Garfield takes on an ambitious task: to chronicle the history of the letter. Any such undertaking will automatically fall short – there are simply too many letters in the world. Much of the history of civilizations is held in epistolary form. So, Garfield offers highlights, including letters from such notables as Pliny, Henry VIII, Napoleon, Jane Austen, Henry David Thoreau, Emily Dickinson, Virginia Woolf, and John Keats. He also intersperses a set of letters written during World War II by a couple of young lovers who ultimately married. Reading some of the letters included in these pages seemed downright voyeuristic. No doubt the letter writers would blush, knowing that their private correspondences had been made public.

Garfield also traces the development of the postal service and the fate of “dead letters” as well as the business of selling letters written by famous people and the development of letter writing hand-books. At the end of the book, he explores the development of email and how it has marked the death-knell for the written letter. Perhaps even more sad, the email (which can at least resemble the letter in style and substance) is being replaced by the text and tweet.

In many ways, To the Letter is a love letter to the letter itself. I wanted to love this book, but didn’t. Still, I admire the author’s intent and learned much in its pages.

I’m old enough to have written actual letters – both ones in the mail and ones passed between junior high and high school classes (Do students still pass notes? Or has it all been replaced by texting?). I remember the excitement of checking the mailbox each day to see if there might be a letter for me and the pleasure of storing old love letters in a locked box to be opened and reread at will.

Email didn’t really enter my life until my senior year of college. Truly, I love email. I love the convenience and immediacy of it. My best friend and I have remained in contact for nearly 20 years via weekly emails, and I am so thankful for that. I can’t imagine that given our busy lives, we would have found the time to have written that often long-hand. My emails retain the form of letters. An email from a friend in my inbox gives me the same pleasure a letter in the mailbox gave me as a teenager. It is a gift from someone who cares about me enough to take the time to write.

And yet, I understand the concern that we are losing our historical record in the process. I think that the greater concern is that younger people are losing the tradition of writing letters of any type. Will my sons ever write a young lady a letter explaining the depths of their love? For their sakes, and the sake of their future wives, I hope so. There are things that can be said in a letter that somehow are never said in person.

I’m glad that I lived in a time in which people still wrote letters. I hope for humanity’s emotional well-being that people continue to do so.