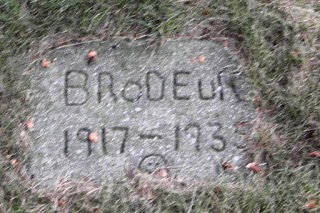 Nearly two years ago, I came across this stone in the St. Rose Cemetery in Chicopee, MA. I blogged about it here: http://annefaye.blogspot.com/2012/08/a-tombstone-with-story.html and resolved that someday I would find out more about it. I then ordered some photos through the mail and ended up getting 300 copies of this photo by mistake: http://annefaye.blogspot.com/2012/11/the-tomstone-saga-continues.html which truly cemented the need to find out more. I've had some "extra" time on my hands recently and was able to make good on that promise.

I contacted the parish affiliated with the cemetery and a very helpful woman dug out "a book that looks like it could contain magic potions" and found the burial record. The young man buried here is Clarence Brodeur. He was buried on April 25, 1935. I was then able to look on Ancestry.com and discover more about him and his family. (I felt a bit like I was stalking a dead man).

He was born in Webster, MA, the second of four sons of Albert and Rose (Provencal) Brodeur. At some point in the early 1920s, his family moved to Chicopee. His mother died before 1930 at which point, according to the census, Albert was married to Emma Berneche, with whom he would have two more children. I was able to find the address of the home he was living in when he died, which is one I have driven by often in my life.

I tried to find his obituary and even contacted the archivist at the Holyoke Public Library (the city where he died), but there was none to be found. It was in the midst of the Depression and it seems that this family was very poor. If I had to venture a guess, I would say that this stone was made by his older brother, Albert (a.k.a. Telephore). Albert died in 2000 and was a long-time member of the parish I grew up in. I did not know him, but it is certainly possible that I saw him many times in my life.

And so, I guess the road ends there. I requested to have a Mass said for Clarence at my parish. Maybe that's what he needed - someone to pray for him. I honestly don't know, but I hope that someday, in heaven, I get to meet him and find out the story behind that smiley face on his tombstone!
Posted by Anne Faye at 5:56:00 PM